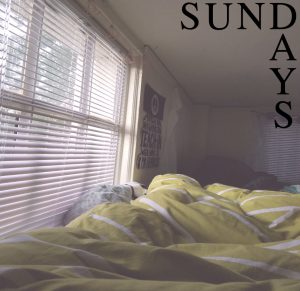 Throughout my playlist, I attempted to convey the feeling of a Sunday, especially after an eventful week. I worked with themes of melancholy, loneliness, frustration, reflection, apathy, and tiredness. By using lyrics meanings, music genres, song titles, and tempo, I hoped to convey these feelings quite accurately, both if the audience was listening to audio only or if they just glanced at the track list.

One of the first rules I abided by was that the title of each song had to have an obvious connection to one of my set Sunday themes. I made exceptions for “Sun Hands” and “Love Like a Sunset Parts I and II” because the overall musical feel of the song slipped comfortably into the rest of the songs and was integral to setting the Sunday mood. After that I chose songs that could be categorized as indie folk, rock jazz, or just straight up jazz. The traits of these types of music, such as slow tempo, acoustic sound, soft vocals, and sad lyrics, were well-suited to convey my Sunday themes. From these ground rules, I decided that my rhetorical situation would focus on Sunday moods rather than songs you would play on a Sunday, which are two slightly different mixes.

My Songs for Sunday mix loosely follows a Sunday chronologically, beginning with the floaty moments in and out of sleeping in late. Thus, “Sleeper” had only one logical spot in the mix. The slow-going jamming indie rock tune explains the way a person cycles through waking up and falling back asleep on a lazy Sunday. This song flowed well into Kurt Vile’s “Over Everything”, which was a faster tempo, with a spacey, acoustic, and rambling feel. The title was an excellent choice for the theme of apathy, because at the end of the week a person can very much feel “over everything”. Then I transitioned over to airy indie songs like “Sun Hands” and “Inside Out”. These songs helped convey how far away reality feels on a Sunday as the tasks of the next week sit in front of you. From there I switched gears into “Chamber of Reflection” which had an excellently fitting title. Sundays give one ample time to reflect upon the successes and failures of the week, and the loneliness of the day adds to this period of reflection.

“Love Like a Sunset Parts I and II” were the outliers of this playlist, both musically, thematically, and title-wise. I did this in order to break up the playlist into the dreamy and lazy of Sunday mornings and the frustrating and anxiety-filling nature of Sunday evenings. These two tracks could represent feelings associated with a nap, church service, or meal with a loved one that give Sundays a more optimistic vibe. The growing positivity of the songs conveys this well, however, the positivity fades slowly into the pessimistic themes of “Wasted Acres”, “Pain”, and “Northern Blues” just like reality creeps in later in the day on Sundays.

The last three tracks take a slower turn as the end of the day approaches. They are melancholy, just like the previous three tracks, however oddly relaxing. Sunday evenings tend to take on this quality as well, as you prepare for the next week of obligations and responsibilities. The last waking hours of Sunday serve as a reflection of the weekend and a final bit of relaxation time. “Daydreaming”, “Golden Slumbers”, and “In a Sentimental Mood” are sad and reflective, but not as depressing as the earlier parts of the day. And in this way, the Sunday ends.